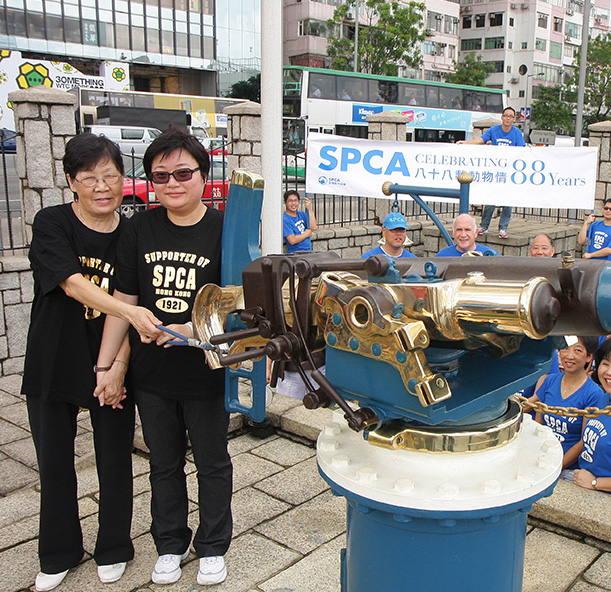 Amy (2nd from left) was appointed, together with Sau-Tse who had served the Society for 21 years at that time, to lead the firing of the Noonday Gun on the 2010 Anniversary Day of the SPCA. When Amy first joined the Society, she had to take care of the animals as well.

Amy is definitely the most experienced staff at the SPCA. Having spent 31 years with us, she has experience in handling many different areas of work. Amy recalls that when she first joined the Society, due to limited manpower, she had to take up several different responsibilities at the same time, from handling animal rescue calls to allocating cases to the inspectors. She even assisted vets in seeing patients in the clinic and became an education ambassador to take a group of kids on a tour at the centre when her colleague had to call in sick. Stationed at the Kowloon Centre, Amy often takes responsibility for making sure everything works well at the centre, from changing the light bulbs to ordering materials and supplies.

With her helpful and cheerful personality, Amy has met a lot of people in her 31 years of experience. Once she befriended an old couple who brought their pet to the clinic. She held their hands and showed them the way out afterwards. She then stayed in touch with them and exchanges a Christmas card every year. Amy has been moved by the close bond between pets and their owners on many occasions, but it has not always been pleasant. Amy becomes upset whenever owners abandon their pets for various reasons. She hopes the education work the Society is doing will help to raise awareness of the general public and in the long run improve animal welfare in Hong Kong.