Adopted Sunny the golden retriever in 2007 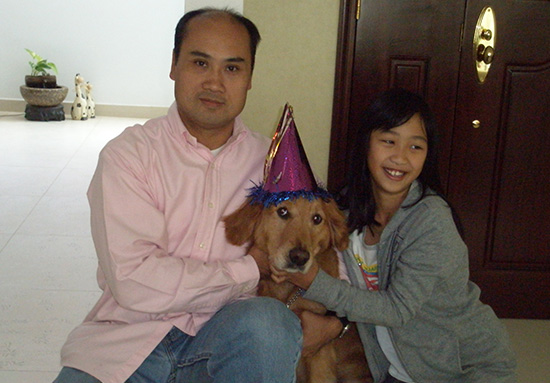 Dogs have always been part of Mrs. Tsang’s life. Before she met Sunny the golden retriever, there were two dogs that came into her life – Nancy the stray boxer and Bebe the German Shepherd that was surrendered by a couple who had already broken up. When they both passed away due to old age, Mrs. Tsang’s family decided to adopt a dog again. They knew that the SPCA is the longest standing charity organisation in Hong Kong with a clear and transparent adoption procedure. Moreover, they have adopted a hamster at the SPCA before. All these make the family decide to give it another try - that’s how they met Sunny.

When they first saw Sunny, he was deadly pale and terribly emaciated. Apart from that, he was super excited unlike most of the abandoned dogs. The family decided to adopt Sunny right away though they knew nothing about his past. They found out that Sunny is actually a sweet guy and he never gives up on anything. He has been an important part of the loving family for so many years, providing company for the family members and creating so many fond memories in life.

3 months after adopting Sunny, the family introduced a new family member Jessie the poodle to him, who was only 2 months old at that time. When Jessie couldn’t climb the stairs, Sunny would try to help by nudging her with his nose, just like an elder brother taking care of his younger sister. One time, Sunny underwent anesthesia for a surgery. When he woke up, he immediately burst open the gate, walked pass the surgical room and went straight to the waiting room – just because he heard the family chatting there even though he wasn’t fully recovered. The family was so surprised after seeing his ‘escape’ in such a clumsy state.

Although Sunny is aging, he remains positive to everything and tries so hard to live his life to the fullest, especially after having a stroke 2 years ago. Mrs. Tsang and her daughter were so worried about him at that time, knowing he could barely stand up by himself. Although they were really depressed, they still insisted on giving him a massage every day and feeding him bits by bits. Sunny didn’t give up as well. After a week of love and care by the whole family, Sunny could finally stand up on his own and learned to climb the stairs no matter how hard it was. He eventually recovered half a year later under the love and support of the family. Sunny is already a senior dog now at the age of 16. Being the best friend and a member of the family, he has stayed with them for 15 years and it’s still counting.

Mrs. Tsang is said to learn that there are quite a number of animal shelters these days but unfortunately some try to turn adopting animals into a business, while some are keeping animals in a bad environment. She hopes that there is a better control over such organisations in order to improve them and benefit animals as a result. Also, she hopes that there will be more and more responsible pet owners to take care of their pets until they have eventually passed away. Every pet owner should respect the uniqueness of his pets, and build a loving home for them¬¬ no matter they are sick or old.