Peter and the Homing Department in 1999. Peter’s love towards animals is the drive for his continuous service at the SPCA. Peter demonstrated how to handle a dog as a veterinary nurse for a TV crew. 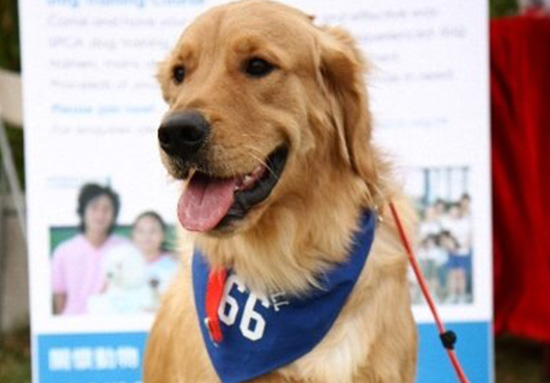 Moses has been a loyal friend and companion to Peter for the last 13 years. He is also the most valuable PR staff who has been actively participated in a lot of events!

Peter is, perhaps a member of the SPCA family who has the most diverse background of all. Although he left the Society in 2009 to join a commercial operation, he came back to us in 2019, is still one of our most long-serving staff. During his time with the SCPA, he has worked in veterinary service, welfare and customer service. He began his career at the SPCA as a clinic keeper 33 years ago, before becoming a full time veterinary nurse after he graduated. In 2000, he played an important role in setting up the current Welfare Department and restructuring the way that animals are received and adopted. He instituted a more thorough pre- and post-adoption check. The updated structure proved to be an effective way to educate the general public and potential adopters on being a responsible pet owners, and there has been a growing trend of adoption over the last two decades. Kudos to Peter! In 2000, he took the initiative to further develop the Foster Parent Programme, and the Behaviour and Training services and Dogwalker Programme were also introduced to further improve animal welfare.

In 2007, a golden retriever was surrendered by his owner at the SPCA. At this time, Peter was mourning the loss of his previous dog who had died of old age, so he decided to adopt the golden retriever and named him Moses. Since then Moses has been a regular staff member of the SPCA and his handsome face can be seen on many promotional materials and photographs accompanying media interviews. He has also participated actively in many events over the years.

When Peter rejoined the Society, he took up his new role, heading the Customer Service Department, combining his experience at the Society and the commercial world. He is currently spearheading many funding programmes to help pet owners in need - the recently launched COVID-19 Pet Food Assistance Programme is just one example. He hopes to better promote animal welfare through helping more individuals.